400 teachers in Tanzania have been convicted of falsifying certificates. 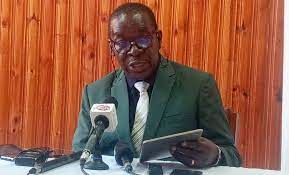 Prof. Komba said that Education based on values ​​hence no value there is no education because it is possible to go to school until higher education but if a person does not have values ​​he will be studied but not educated . “Education goes hand in hand with values. Many of our teachers are more focused on imparting knowledge, but the moral issue is left to the pious masters, which is not right at all.
By Special Correspondent, Dodoma, Tanzania.
SOMA TAARIFA HII KWA KISWAHILI BOFYA HAPA
New challenges require people to think and act in a new light and direction that will help promote and maintain peace and stability among people as well as focus on the destiny of human life. More than ever before in the history of human development, ethical principles and virtues should be given special impetus, as it seems that science is jeopardizing progress. Internal peace and tranquility are matters that should all be addressed. Chairman of the Teachers' Service Commission, Prof. Willy Komba made the remarks recently in Dodoma while speaking to reporters on the work ethic of teachers.
Prof. Komba said that education in general is based on values ​​so, without values ​​there is no education as it is possible to go to school until higher education but if a person has no values ​​he will be studied but not educated.“Education goes hand in hand with ethics, we see what goes on in the classroom, most of our teachers focus more on imparting knowledge according to the subject they teach, but the problem Ethics has left to the pious leaders and teachers, which is unfair because the teaching profession puts ethics aside.
Professor Komba said. Professor Komba described the serious violations of teachers including truancy, falsification of certificates, romantic relationships, stubbornness and drunkenness, where between 2020 and 2021, the total number of teachers' misdemeanor submitted are 1,795 while from July to September 2021 the teacher verified misdemeanor offenses are 461.
CHAIRMAN of the Teachers' Service Commission (TSC), Professor Willy Komba said the problem of forgery of certificates still exists in the teaching cadre, where 461 out of 1,795 teachers found guilty, forged certificates for the period 2020/2021.
He said some of the teachers had been fired, others had not heard their appeals.
However, he did not specify the number of deportees and appellants. Speaking to reporters in Dodoma yesterday, Professor Komba said integrity, dignity, truth, equality and justice are the things a teacher needs to have in order to do justice to his profession, but there are mistakes that have been made by teachers. "The issue of forgery of certificates still exists for teachers. We received 461 certification cases in the period 2020/2021 equivalent to 25.7 percent of all cases. Also in the period July to September 2021 we received 41 certificates for forging certificates equivalent to percentage 22.3, ”he said.
However, he said the first major offense for teachers was absenteeism, with the period from July to September 2021, a total of 931 teachers were charged with absenteeism offenses which is 51.9 percent of all offenses committed. He said in the period July to September, 2021, 105 teachers equivalent to 56.1 per cent were charged with absenteeism offenses.
Professor Komba said in the period 2020/2021, 221 teachers were charged with having sexual relations with students, from July to In September 2021, 31 teachers equivalent to 16.5 percent were charged with having sexual relations with students. He said other offenses were stubbornness which is 6.3 percent, alcoholism 4.4 percent, demoted 8.5 percent, demoted 7.7 percent and warning 7.2 percent.
"There are defendants but after assessing their charges they were found not guilty is 5.5 percent and those who paid compensation is 5.5 percent," he said. He said as a result of the misconduct, 57.1 percent of teachers found guilty of such acts were dismissed.
"A teacher is a person who stays with the children for more than eight hours a day and that requires him to be honest in order to carry out his responsibilities effectively," he said.
list five acts of professional misconduct by a teacher in Tanzania
All penalties imposed on teachers are subject to the rules and procedures of the Commission, and the Commission is committed to doi so.
Those who are not satisfied with the decisions are allowed to appeal to the District Disciplinary Commission, the Commission as well as to the President of the United Republic of Tanzania, Hon. Samia Suluhu Hassan. In addition, Professor Komba thanks Hon. President Samia Suluhu Hassan approved the promotion of 126,346 teachers and adjusted their salaries on time. He also thanked the teachers for their hard work in education and for overseeing the various projects of the education sector, as although they face different challenges, the achievement levels are still increasing. He said teachers have also been overseeing various school projects including the construction of classrooms.
"No teacher who deserved a promotion was fired and those who were promoted had their salaries adjusted on time," he said.
For her part, the secretary of the commission, Paulina Nkwama said that was the final decision-making body.