ANNOUNCEMENT OF CALL FOR INTERVIEW at Chalinze District Council 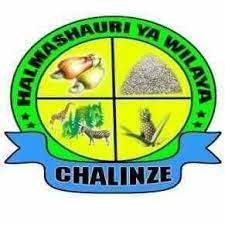 Chalinze is the name of a small town that has become the headquarters of Chalinze District in the Coast Region, Tanzania. The town area is made up of Bwilingu (Chalinze itself) and Pera counties. According to the 2012 census, the two counties had a population of about 48,000.

Chalinze is located 110 km from Dar es Salaam. It is known as an important highway in Tanzania. The A14 to Kilimanjaro and Tanga leaves here and the A7 to Morogoro - Iringa continues as A104 to Mbeya - Zambia / Malawi. For drivers it is popular because traffic police measure the speed of vehicles using machinery and many are forced to pay fines.

The main economic activities in the city are the cultivation of food crops and trade, also pastoralism is done on a small scale. The city of Chalinze has not developed a General Plan for managing, directing and controlling the use of the city's land in accordance with the Planning Act No. 8 of 2007.

ANNOUNCEMENT OF CALL FOR INTERVIEW

Executive Director of Chalinze District Counci, he likes to announce to the public that, job applicantsin THPS Jobs, A total of 113 applicants have been selected for interviews. So the following are called to get to the Interview expected to take place at the District Council Hall Chalinze. In addition, Physicians and Community HIV Testers interviewed them will be held on 07/12/2021 and on 08/12/2021 will be held at Laboratory Technologies, Data Officers, ART Nurses, Clinical Cluster Truckers 8. Pharmaceutical Technologist starting at Full Two Morning. However, a list of such applicants is attached along with this Announcement where during the interview they will be interviewed they will have to come with the necessary original documents including Education and Professional certificates such as; Form Six certificate, four, Professional Certificates, Birth Certificate, NIDA License and Identity.