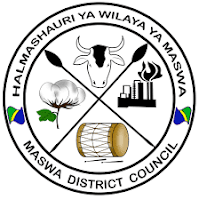 Maswa District is one of the five districts of the Simiyu Region of Tanzania Inhabited by Sukuma (Nyantuzu People). It is bordered to the north by Magu District and Itilima District, to the east by the Meatu District, to the south by the Kishapu District, and to the west by the Kwimba District. Its administrative centre is the town of Maswa.

According to the 2002 Tanzanian National Census, the population of Maswa District is 304,402.

All applications should be sent to: •

This advertisement is available on the Council Website www .maswadc.go.tz Website of the Employment Secretariat www.ajira.go.tz and on the bulletin boards of the Council and Simiyu Region.